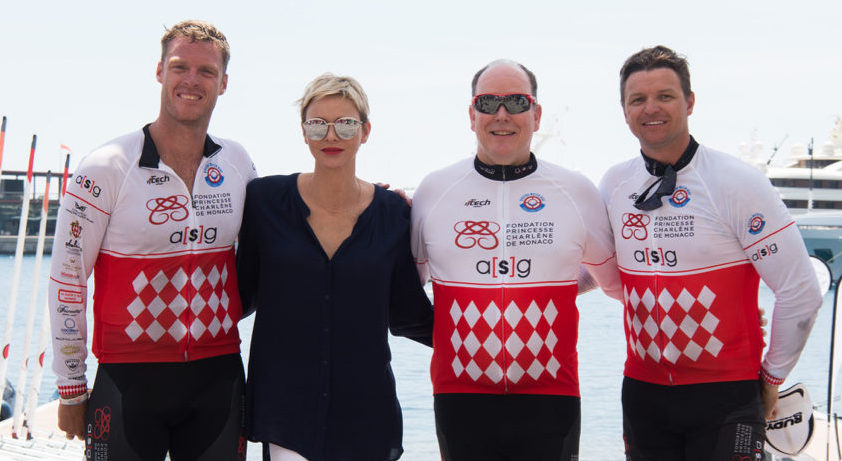 It was straight out of a movie. The camera pans across the azure bleu Mediterranean sea toward the Nice coastline, where it focuses on ten pristine Schiller S1 water bikes, gently bobbing in the water at Beau Rivage beach, ready to be taken for a Sunday morning charity ride.

Enter Prince Albert of Monaco, joined by nine of the biggest names in sport, like F1 Champion Nico Rosberg and Paula Radcliffe, Olympian and world record holder for the women’s marathon, who saddle up at 10 am for the Riviera Water Bike Challenge (RWBC), with their teams cheering from boats alongside, ready to transition to pedal at any moment to the finish line some 21 kilometres away at the Monaco Yacht Club.

And like every blockbuster, a little suspense is needed – in this case, strong south-easterly winds producing whitecaps to make the outcome of the race unpredictable.

The ending couldn’t have been better scripted, a neck-and-neck battle of the bikes on water between Fondation François-Xavier Mora – captained by South African swimming champion Ryk Neethling (who was named Ambassador of the Princess Charlene of Monaco Foundation later in the day) and rugby player Percy Montgomery – and Team Monaco Police.

Cut to the end with Princess Charlene warmly congratulating participants and awarding the winners.

A rather remarkable story, especially as the idea and approval for the charity challenge came only three months ago, to support the Princess Charlene of Monaco Foundation’s project in Burkina Faso, and in partnership with the Monaco Red Cross and Burkina Faso Red Cross, to put into service an aquatic rescue centre.

The Princess Charlene of Monaco Foundation was set up in 2012 to address “one of the greatest silent killers on our planet” by teaching children essential water safety skills and how to swim. According to the Foundation, drowning “claims a life every 85 seconds”, which means in the two and half hours it took to complete the Nice-Monaco course, 105 people lost their lives.

The major fundraising event to support the RWBC was a gala dinner and auction held in the presence of Prince Albert at the Monaco Yacht Club on Friday, March 24, which raised €266,000.

Sunday’s Riviera Water Bike Challenge was Monaco at its finest, a community coming together through sport to raise awareness and money for the Princess Charlene of Monaco Foundation. Ten teams comprised a total of 50 athletes and amateurs – including four Ambassadors of the Foundation, Pierre Frolla, Nic Lamb, Jamie Mitchell, Terence Parkin – and 43 Monaco businesses supported the event.

Paula Radcliffe summed it up best to Monaco Life: “It was a really fun day. The team ambiance on the boat and also between teams was great, with lots of friendly competitiveness and teasing going on, and I really enjoyed it.

“The wind made it tough going and we had to work hard but everyone was really encouraging each other. I am definitely up for it next year.”

Before the race start, there was a minute of silence in memory of Saturday’s London attack victims.